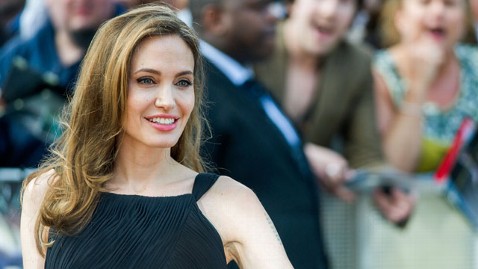 Angelina Jolie made a surprise, emotional appearance at a screening of A Mighty Heart at the Los Angeles Museum of Tolerance on Wednesday night.

The unannounced guest surprised friends and supporters at the event, which was co-hosted by Amnesty International and was also a fundraiser for the Daniel Pearl Foundation. Jolie, who plays Marianne Pearl, widow of slain Wall Street Journal reporter Daniel Pearl, thanked Daniel’s family for their cooperation and kindness.

“I hope we got some part of Danny’s life and spirit in this movie,” she said to Daniel’s parents, who were seated in the front row. “I hope that we have made something that speaks to you and to his work.”

Also on hand at the event was Danny Futterman, who plays Daniel Pearl in the movie. He thanked the family for helping him understand their son and “what it is that he believed in so passionately.”

Brad Pitt, whose Plan B produced A Mighty Heart, hopped a plane from Las Vegas to L.A. immediately following the premiere of his upcoming movie, Oceans 13, in hoped of joining Jolie and the Pearl family at the screening. But, according to Bonnie Abaunza, speaking for Amnesty International: “He didn’t have quite enough time to get here, but he was here in spirit.”

Added Abaunsa: “It was a special night for Danny’s friends and family to see this movie together. This wasn’t about Hollywood. It was about family.”